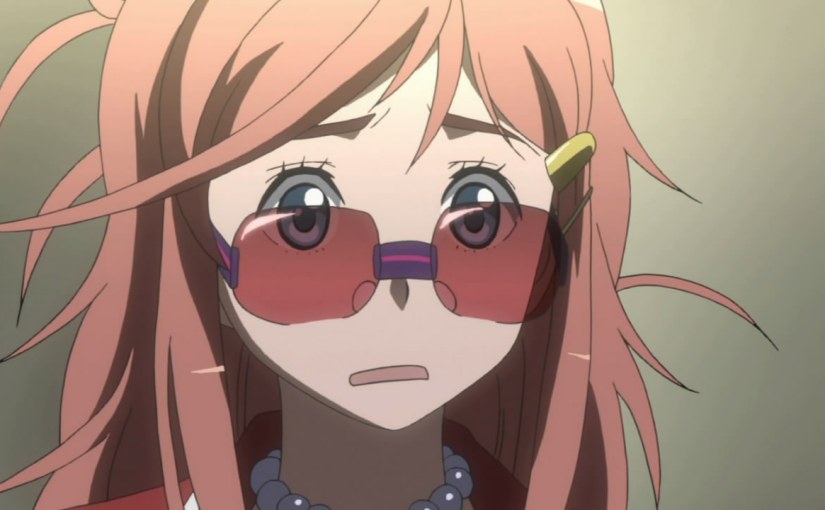 The 14th episode of Pirates brings with it a bit of a quandary for Marika. Absurd circumstances dictate the need to bring in a new crew. What does she look for? Why does she not notice the ready made replacements that she’s known for sometime until the very end? The next arc truly begins with this episode and may be Marika’s biggest test to date.

Marika went into the piracy business as captain of a settled crew who were known to be extremely competent at their positions. After they are all wiped out for a minimum of two weeks from a mystery virus carried by the monkeys they were shipping, suddenly she is forced to take action to maintain the Bentenmaru’s piracy certification.

Over the last couple of episodes, Ririka has actually taken on a larger role, though I did find one particular aspect of her participation in this episode interesting. When the Bentenmaru crew are able to call for help, they call Ririka. Whether this is a lack of trust in their new captain, or just wanting to talk to someone familiar with the insurance process is an open question, but I think Ririka does handle it well. She tells her daughter that going to the insurance company is a difficult process, and she did come to blows in the past over it, but she doesn’t stick around to guide her through it. Only when she is asked by Marika does she provide advice.

By far, the largest point of emphasis in this episode was trust. It begins as Gruier is suspicious of what Marika is doing in the clubroom while the rest are doing club activities. Gruier knows that there is a problem with the Bentenmaru, so she wants to help her friend get through it. Marika gladly accepts that help all while trying to distance herself by telling her that she’s still a princess.

The rest of the recruitment trip seems to be trying to pinpoint what exactly Marika is looking for out of crew members. She has to talk to people she doesn’t know and those conversations don’t go well. She can’t decide whether she really wants technical expertise or a favorable combination of personalities on her ship. She simply never had to think about it before now because the crew of the Bentenmaru would be her ideal crew.

The trust issue is actually settled before the twist at the end. As they are deciding drinks at the bar, Gruier’s temptation to go for an exotic drink reminds her of her mother’s advice never to go for strange drinks at spots like they were at. So she goes for the trusty mineral water, something that can always be depended on for the same taste no matter where it’s consumed.

Then, there’s the introduction to Kenjo Kurihara, Chiaki’s father and also the captain of the Barbalusa. Marika recognizing him as a captain was pretty impressive for the first time they met. Then again, he does carry himself with an air of authority, much like your typical pirate captain from numerous stories in the past. He seems almost like Ririka oddly as he points Marika at the right direction on how to choose her next crew.

Of course, the big reveal for the next crew comes off as a triumph of friendship and camp at the same time. Hanazawa Kana singing badly on purpose just doesn’t work. Marika turning into the densest person in the world is actually pretty accurate considering the way she has gone from bright student to struggling to get by in school. Then again, she’s supposed to be a brilliant captain. A brilliant captain who only now realizes that it’s time to turn to the youth team for results.

Next week has the yacht club taking control of the Bentenmaru which raises a couple of questions. Can you win anything with kids and what will the existing crew think of the fact that they’ve been replaced by a bunch of high school girls? Also, I’m rather curious how Schnitzer came down with the same virus.