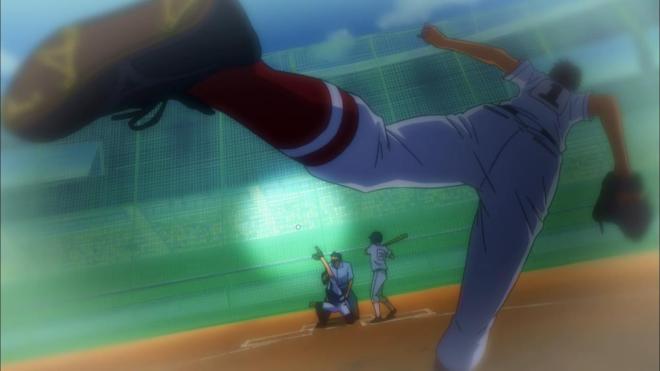 Eijun pitches in the final game of his middle school career for his school that is being torn down. He ends it with a walk-off walk that sails into the backstop. It just so happens that he managed to never win a game he pitched and he’s mocked relentlessly by the other team after the game that leads to a fight. But everything will be okay because he will lead his same teammates to Koshien at their new high school. There’s just the small matter of studying for it, until he’s recruited by an elite high school in Tokyo. He of course introduces himself by picking a fight with the biggest slugger on the team.

I was really expecting this to be like any number of baseball anime. Eijun pitches heroically in a loss and is appreciated for it. That perception went out the window as soon as that final pitch sailed over his catcher. At that point, this turns into a show where every character turns into an asshole in a funny way. Eijun starts slapping umpires and the other team. He doesn’t study at all. The woman who scouted him in that game uses every trick in the book to make him angry enough to go to Tokyo to see the facilities. She just shows such contempt for the kid she is recruiting. He’s just some country bumpkin who doesn’t know what real pitching is like. The high school’s star slugger spends his time insulting the younger pitchers while his huge gut hangs over his belt. Prince Fielder he is not. Even the catcher has glasses that ooze asshole character all over him. I hope they can keep the level of insults at each other as high as possible. That’s what real baseball fiction is all about.

As far as the story is concerned, anyone who has watched 2 baseball anime should know where this goes. Eijun eventually learns to pitch well and work with his talented teammates and they probably go to Koshien. So all that really matters is that it entertains along the way. Baseball and most sports anime are more about plot execution than doing anything really creative.

As far as production goes, the musical standard for this genre will always be Princess Nine and unfortunately Production I.G. and Madhouse couldn’t get a full philharmonic orchestra to provide the score so that’s going to be a minus here. The visuals are a bit more expensive than most anime since this airs on Sunday mornings and kids generally get a bit more money in what they are watching. Unfortunately, I don’t think there’s going to be an episode with characters practicing by swinging fishing rods through crashing waves.

My Verdict: Watching this as a comedy is the way to go. I’m just surprised that even shows that are aimed at teenagers at least are fully embracing having heroes that are assholes. That’s a definite plus when it comes to comedies for me. If you care about baseball, then this is probably not a show for you.

2 thoughts on “Ace of Diamond: A Quick Take”