Think about that for a minute. There are just so many things that can be said about the mayor of Toronto in title only. I will just let this list of stories do the narrative work for me. 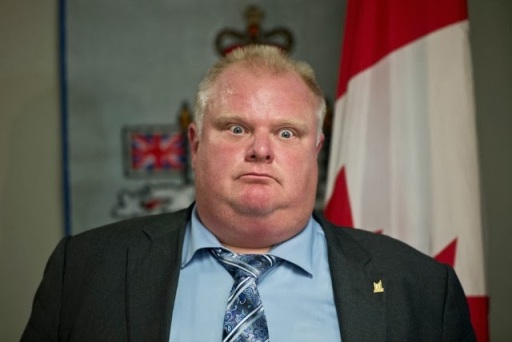 Rob Ford: While we were watching the circus

Is Rob Ford just too honest?

The Best of Toronto’s Insane, Terrible Mayor Rob Ford: an Introduction for Americans

Sarah Thomson: I thought Mayor Rob Ford was on cocaine

Toronto Mayor Rob Ford says he coached latests shooting victim: He was ‘one heck of a football player’

Rob Ford In A Maple Leafs Jersey Posing With The Hamburglar?

City of Toronto deeper in debt under Mayor Rob Ford

Why Rob Ford shouldn’t clean up his act

‘I smoked a lot’ of pot, Toronto Mayor Rob Ford says, but he won’t say when

Rob Ford’s billion-dollar boast not worth a dime

Rob Ford vs. Justin Bieber: Who is Canada’s greater embarrassment?

I literally took one headline per week in constructing all of that above. There was no shortage of headlines to pick from most weeks. I even had to leave all the stuff about his being stripped of powers by the city council because of the other stuff he was doing at that time. Anyway, I have to give a special thanks to this post to Tim whose Twitter bio was the inspiration for the title of this post. He also does great work in making the politics of North America’s 5th-largest city as funny as they are.

5 thoughts on “12 Days of Something III: My Favorite Anime is Toronto Politics”