Jozy Altidore is something of a mystery player. The American striker plying his trade in the Northeast of England at Sunderland has something of a bad reputation. While no one really calls him Dozy Antiscore, it can’t be debated that he has very rarely troubled the score sheet in the Premier League. It’s never a good sign when you get quotes like this from the manager after a match:

“If Jozy had scored, you would have said it was a great decision to play him. I tried to say him at halftime to look for the net and don’t keep thinking about that, but he needs a goal.”

His defenders on the internet last season were pointing to the World Cup for his breakout and possible move to a different club. Let’s see how that ended:

With the numbers 69 appearances, 2 goals standing out to anyone who looks at his performances in England, he still has his defenders. They say things such as; Sunderland is a club with terrible players, no one will pass him the ball, he needs a manager that will let Jozy be Jozy out there. So through the magic of Football Manager, we are going to give him just what he needs…

Since this is about making Jozy succeed in the Premier League, we will need to give him some sort of support at the Stadium of Light. First, we need a manager who will ensure that Jozy will always play even if he is woefully out of form. Someone who is young enough to understand his needs but will still make him the star. Someone who you could say is like a producer (and to keep this in the realm of an anime blog post). 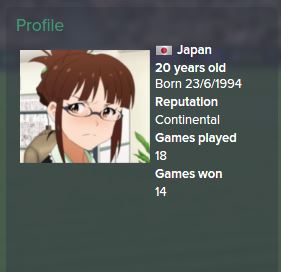 And done. Now we need to surround the center of our cast of footballing idols to make sure that Jozy will always have a chance to do some goals. So with the magic of the editor being deployed again this year, we’ve given him the following supporting cast:

If you remember last year, when I went crazy with the editor I sort of broke the Gibraltarian economy. Having learned my lesson, I sent back some of my deadwood players to the clubs I stole from. I’m sure Real Madrid and Barcelona will enjoy having Danny Graham and Lee Cattermole in their respective squads. Upon seeing that the wage budget was something like £4 million per week over which would be enough to have the Financial Fair Play people laughing hysterically, I unilaterally gave all my new players 90% wage cuts…and I was still over a million over.

I then had to settle on a tactic. So with my World X and Jozy I wanted to do an attacking formation. A 4-2-3-1 with my star man up front with plenty of attacking intent. When it worked, it was wonderful. When it didn’t then any team that could keep hold of the ball could attack the 2 defenders and goalkeeper I left back. Who doesn’t like seeing scorelines like 5-3 or 6-2. It all came to a head when playing Manchester United away and seeing Jozy score a hat-trick at Old Trafford. In an 8-4 defeat.

At this point, my opportunity to turn Jozy into a proven Premier League goalscorer was not looking good. What good is it when my defense would make 30 goal a season strikers common place if I could only get Jozy to 10 goals. So with my tactic proven to be stupid, I went to the official forums of the developer and I knew exactly the person to look for, Mr U Rosler. While named after the German recently sacked at Wigan Athletic, his tactics always had great names. These include gems like Doom of Men, Field of Bones, The Quickening, Dark Matter and The Tube. For this particular job, I went with one called Apex Predator. I would not lose again in the league…until the last game when I intentionally played a weakened side. 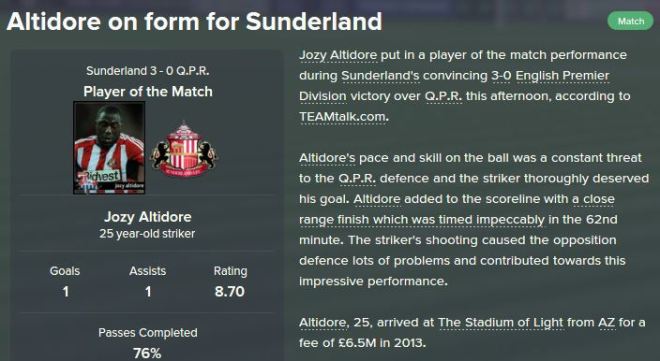 Unsurprisingly, when there is a team that is not losing games, there is a striker also scoring lots of goals. Actually, that turned out to be Messi, who broke the Premier League record for goals in a season with 4 games to go. But at least Jozy was putting in those assists. Anyway, to make this long story short, Sunderland won the league going away with 97 points. As for Jozy:

That’s 25 goals from 38 matches in a world class team. It was the 3rd most in the league, but paled compared to Messi putting up 40. At least he made it into the Team of the Season to make him feel better:

So in conclusion, I think this proves that given the right amount of talent around him, Jozy Altidore could become an elite striker at the Premier League level because Football Manager is always right about these kinds of things. Of course I would still want to attempt to disprove this theory by questioning Football Manager itself. That would encompass choosing the same team with the same elite players, only choosing to play the worst player in the game as a striker, who is also probably the wrong side of 40 and plays somewhere in the South Pacific. I will leave that for another day.

2 thoughts on “12 Days of Something IV: Fixing Sad Jozy”